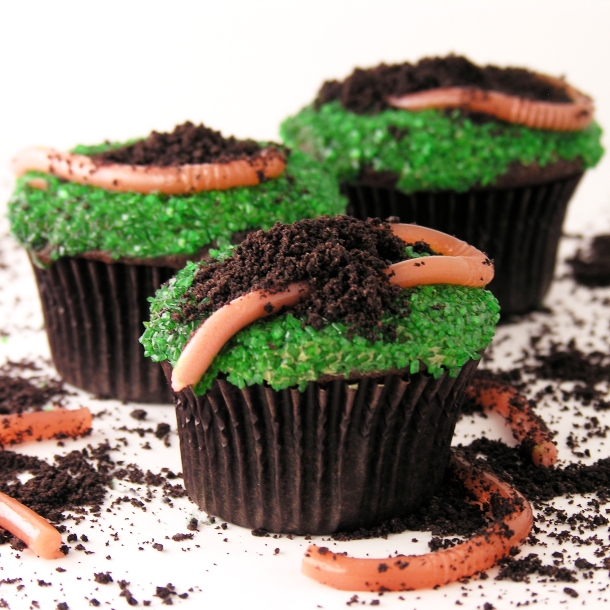 These fun little cupcakes will entertain your family and friends with slimy (raspberry!) earthworms poking out of the top!

Well, it’s October, and that means it is time for creatively creepy edibles!  Last year I had SO much fun with my Broken Glass Cupcakes and my Toxic Slime Cupcakes!  Oh my goodness, I love both of those recipes so much that it was hard to think of anything that fun and creepy for this year!!!

I loved the idea of worm-filled cupcakes and decided that gummy worms are way too cheery, with all their fun bright colors.  I wanted WORMS- big fat earthworms- in my cupcakes.

I’m not sure why these are not readily available for purchase in the candy aisle of my grocery store, but fortunately I found a TON of recipes for make-your-own gummy earthworms online.  I read about 10 recipes (they were all very similar) and gave it a shot.

I love them!!!!  I had a hard time biting into one to try out the flavor because they were so realistic!  These are really not very hard to make, and I can think of a TON of desserts these would be fun to serve with.  These are even Father’s Day friendly (I realized this when the men who were eating the cupcakes started talking about fishing with earthworms…) or maybe you could “dress up” my apple cupcakes from last week with a few worms! 🙂

Here’s how to make these fun little desserts: (printable recipe)

WORMS: (make the day before) 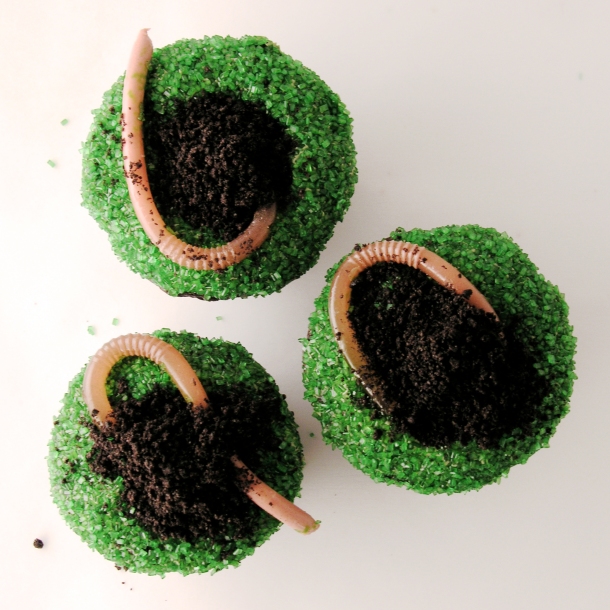 My thoughts:  These crack me up. Everyone loves them, but kids are SO suspicious that you might have used real worms!  One of my friends gave some to her grandkids and the oldest just sat and stared at hers and finally declared, “I saw one move!”  They are disturbingly life-like.  These are great covered in the fridge for a day, but at room temperature the worms start to dry out after a few hours. I hope you get a chance to try this creepy little treat!  Enjoy!!! ~r

Other creepy recipes for your October fun: (click on a photo to see the recipe)

Ruthanne is a scientist with a passion for baking and food photography. Using her kitchen as a lab, she loves experimenting with a variety of flavors and ingredients to create unique, fun and ultimately tasty delights! Thus she created EasyBaked, a website where sugar and chocolate overflow in fun and easy recipes. Her Motto: Money can’t buy happiness -- but it can buy marshmallows, and that’s nearly the same thing! www.easybaked.net
View all posts by Ruthanne »
← Fall Apple Cupcakes
Pumpkin Guts! →